The Tipping Point: A Panel with Catharine A. MacKinnon and Saru Jayaraman

How the Subminimum Wage for Tipped Workers Keeps Incomes Low and Sexual Harassment High in the US Restaurant Industry. Moderated by Susan Brison. 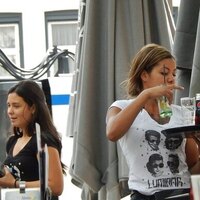 The Tipping Point: How the Subminimum Wage for Tipped Workers Keeps Incomes Low and Sexual Harassment High in the US Restaurant Industry

Co-Sponsored with the Ethics Institute

A legacy of slavery, the subminimum wage for tipped workers forces a mostly female workforce of waitresses, largely in very casual restaurants, to struggle with the highest rates of poverty and sexual harassment of any workforce, because they must tolerate inappropriate customer behavior to feed their families in tips. Join us for a panel discussion with preeminent experts researching gender-based discrimination and violence.

Panelist Bios:
Saru Jayaraman: As the President of One Fair Wage and Director of the Food Labor Research Center at Univ. of California, Berkeley, Saru Jayaraman has spent the last 20 years organizing and advocating for raising wages and working conditions for restaurant and other service workers. Saru is a graduate of Yale Law School and the Harvard Kennedy School of Government. She was listed in CNN’s “Top10 Visionary Women” and recognized as a Champion of Change by the White House in 2014, and a James Beard Foundation Leadership Award in 2015. Saru authored Behind the Kitchen Door, a national bestseller, Forked: A New Standard for American Dining, and most recently Bite Back.

Catharine A. MacKinnon is a lawyer, teacher, scholar, writer, and activist.

She is Elizabeth A. Long Prof. of Law at the Univ. of Michigan and James Barr Ames Visiting Professor of Law at Harvard Law School (since 2009). She holds a B.A. from Smith College, a J.D. from Yale Law School, and a Ph.D. in political science from Yale, specializing in equality issues, focusing on sex equality under international and domestic (including comparative, constitutional, and criminal) law and in political theory.

Prof. MacKinnon pioneered the legal claim for sexual harassment and, with Andrea Dworkin, created ordinances recognizing pornography as a civil rights violation and proposed the Swedish model for abolishing prostitution. The Supreme Court of Canada has largely accepted her approaches to equality, pornography, and hate speech, which have been influential internationally as well. Representing Bosnian women survivors of Serbian genocidal sexual atrocities, she won with co-counsel a damage award of $745 million in August 2000 in Kadic v. Karadzic under the Alien Tort Act, establishing the first legal recognition of rape as an act of genocide.

Susan J. Brison is Eunice and Julian Cohen Professor for the Study of Ethics and Human Values at Dartmouth College and Visiting Professor of Philosophy at Princeton Univ.. She has been a Mellon Fellow, a National Endowment for the Humanities Fellow, and a Member of the School of Social Science at the Institute for Advanced Study in Princeton, New Jersey. She has published scholarly articles about feminist philosophy, free speech, gender-based violence, and other topics.